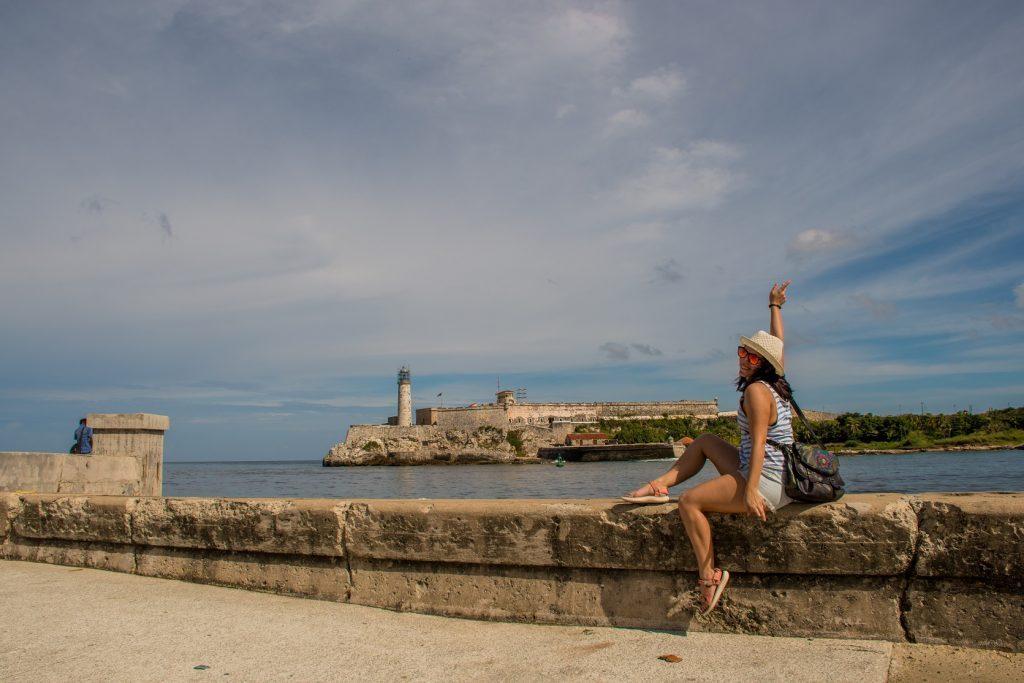 Half of my heart is in Havana, ohh na-na…

Nope, once it’s in your head, you can’t get it out.

And same goes for the city, the capital of Cuba, which is one of the most unique places we’ve ever been to.

It’s a city where the past tries to catch the future and somehow can’t make it just quite yet. Perhaps this is what makes it so special. We spent only two days here and later regretted we haven’t stayed a bit more. 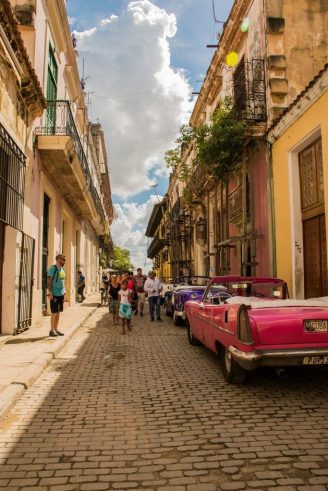 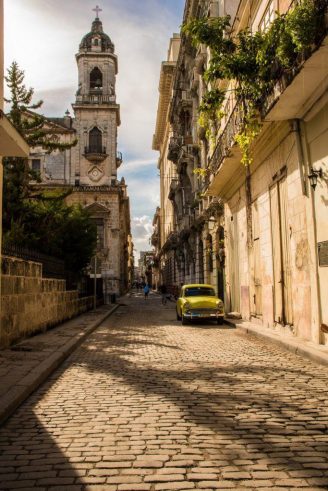 Stepping into the past. It’s kinda magical. 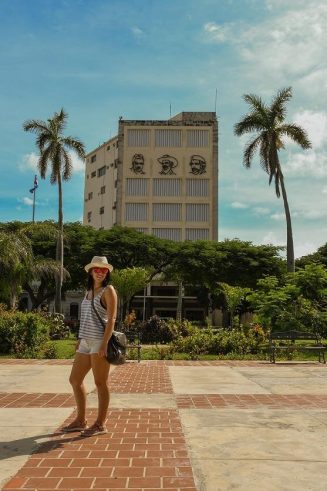 After an abundant breakfast, we headed to explore the old center of the capital.

I always fail to learn that distances are something subjective (and therefore different in every country) and of course instead of going right towards the city center, we went all the way around. But this detour allowed us to see the gorgeous beach-side avenue and we entered the city center from the seaside like proper European Conquistadores (sorry, just joking).

Whilst wandering along the ancient cobbled streets and being constantly bombarded by offers that we ‘can’t refuse’, we suddenly heard a loud, persistent ‘Hola!!’ coming from amidst the crowd. I wanted to turn around and give the pesky street-merchant a piece of my mind when we quickly found out that the shouts were coming from a Slovenian couple who was on the same plane as we were. Ahh, what a small world!  Finally, we managed to introduce ourselves to one another (Miha and Metka– M&M! 😊) and agreed that next time we bump into one another we will definitely go for a mojito since our mission for today was to visit a few museums.

Well, we skipped the first museum as we hadn’t changed Euros to CUC by then.  We skipped the second one as we felt it was too expensive and the third one because we were kinda lazy. The fourth one – I’m not too sure why we skipped this one, but hey, what can you do… 😀

But there was one we were sure wanted to go  – the Rum museum of Cuba. I mean, is there any better choice for the first museum on your yearlong honeymoon?! 😀

We were lucky and arrived at the museum just five minutes before the tour was supposed to start. Well, that was at least what we thought; in reality, we came to the museum one hour and five minutes too early, as the clocks went back an hour during the night (Er- and that would also explain why we had to wait more than half a freakin’ hour to get our breakfast at “8am”).

But back to the museum – the tickets cost less than $10, and the rum-tasting is included, so we gave it a go. As we still had to wait an hour, we sat in the shade of the interior courtyard and indulged in the noble act of Cuba-Libre drinking. The bartender was quite generous with the amount of alcohol, so we were feeling rather tipsy already before the tour.

The museum itself wasn’t soo special and the amount of rum offered to us during the tasting was quite low for Cuban standards.  However, the guide was rather entertaining, which made the whole experience quite worth-while. Perhaps it would be even better if we’d drank 2 Cuba Libres in advance!  😀 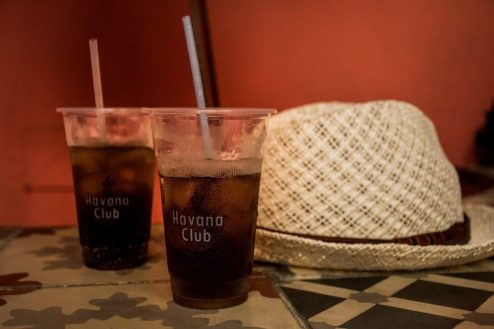 We had to try Cuba Libre already before the tour, duh. 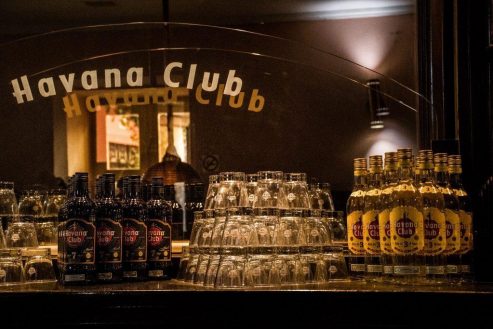 No export of this rum to the USA…I feel bad for you guys, honestly! I mean, it’s something we can’t imagine living without 😀

As we decided to make this day our museum day, we visited another one – Museo de la Cuidad. This one required quite a lot of inventiveness from our side. You see, after paying the tickets, we were strolling along the endless corridors of the museum and were approached by tour guides, offering us a tour of a corridor, that had been blocked off to other guests. Of course, we decided to see these marvelous hidden gems personally, not knowing that the tour guide expected a tip afterward. You can imagine that they weren’t too happy as we “failed to give them” any pesos for moving away the rope and following us 😳. #budgettravelers Perhaps the most pleasant attraction of the entire museum was the colorful peacock, which strolled around the courtyard.

As we decided to go strolling around the other quarters of the old town the next day, enjoying a delicious cocktail on the terrace of the Hotel Nacional (once visited by the most notorious mobsters) and driving with a cabriolet into the sunset, we ran out of time to visit more museums. 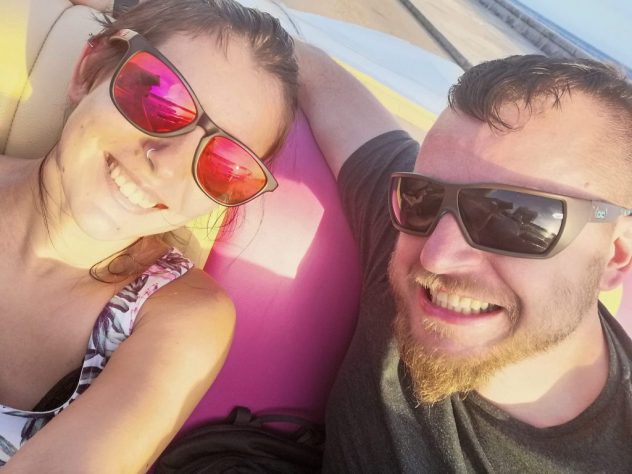 Ride with a cabriolet – very “turisty”, but a lot of fun! 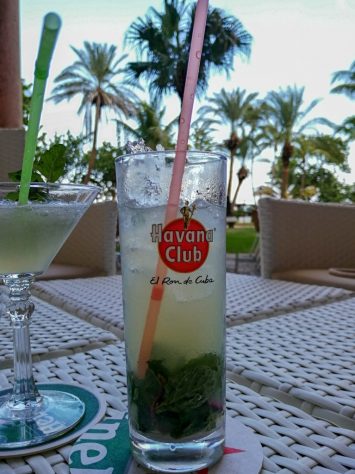 The most expensive cocktail in Cuba – almost $6 (Hotel Nacional) 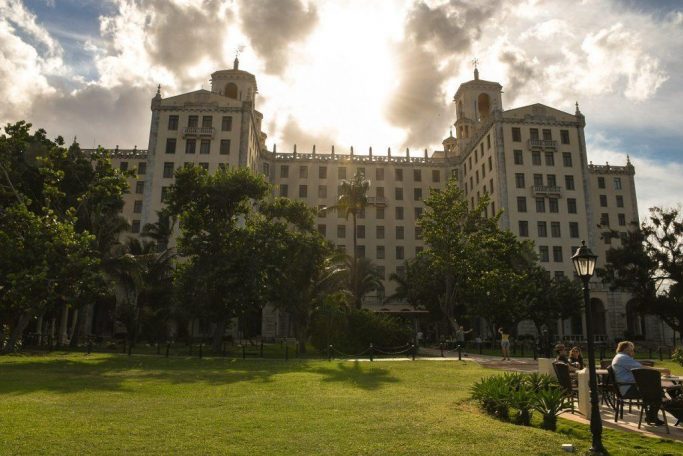 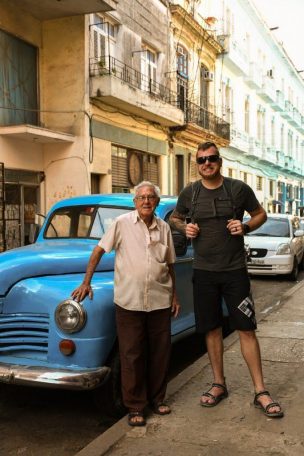