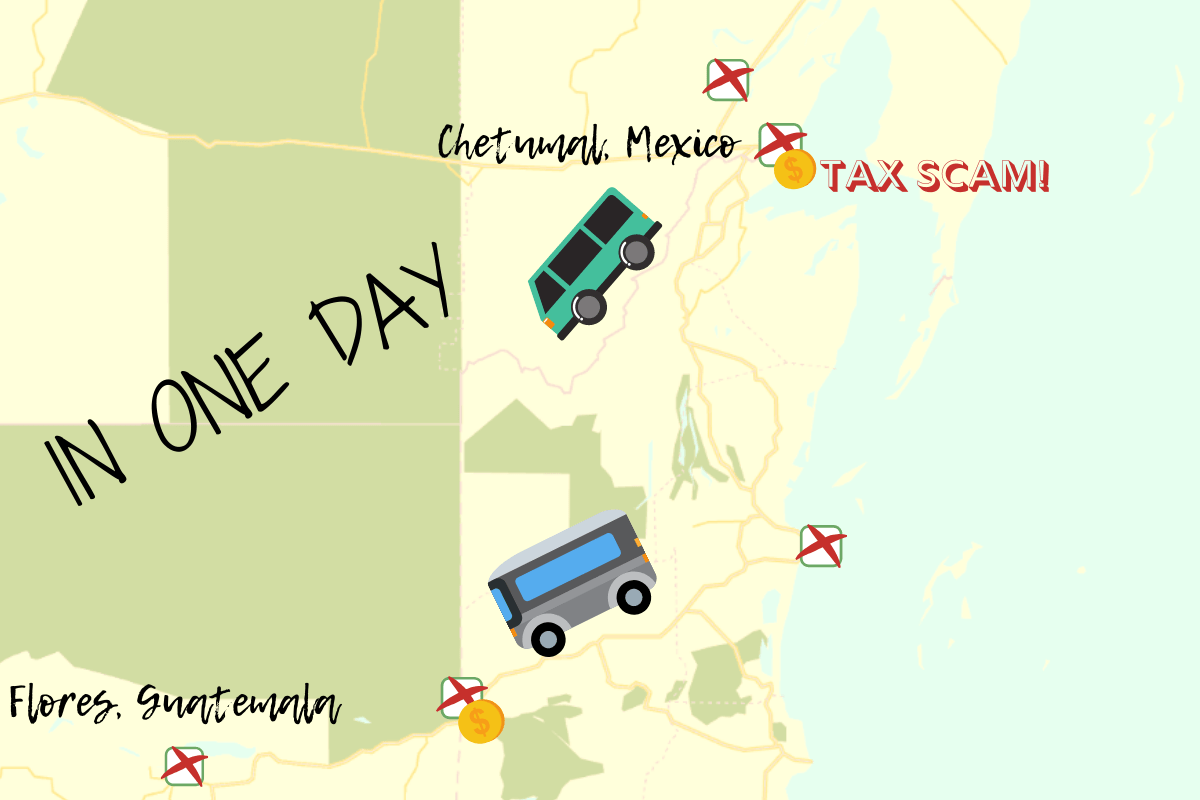 By
Sandra
on
This post may contain affiliate links, which means that if you choose to click trough and make a purchase, we will receive a small comission (we’re literally talking pennies here folks!) at absolutely no extra cost to you. This allows us to keep creating awesome travel tips for free and… Ah, who are we kidding here, we’re gonna spend bucks by buying yet another flashy toy for our dog which His Highness will promptly ignore.
Share
Tweet
Pin122
Share
122 Shares

When our month in Mexico was coming to an end we were faced with a “million-dollar question” – whether to continue our journey from Chetumal (which is a border town in Mexico) to Belize or skip the country altogether and go straight from Chetumal to Flores in Guatemala.

Well, it wasn’t exactly a million-dollar question… but it was a quite-a-few-dollars question since the Christmas holidays were approaching!

After browsing through Booking.com we realized that in Caye Caulker in Belize (where we wanted to go) almost everything was full and prices had sky-rocketed which was a big no-no for our modest backpacking budget (we are talking about 100€ and more per night for staying in a less than an appealing room).

So, an almost equally important question came up:

How to go from Chetumal to Flores in one day? Is it even POSSIBLE? How much will it COST?

Guess what – it is possible, Mr. Google said.

Even if this would turn out to be false information, we could potentially still spend the night in Belize City and then continue our way to Flores.

But when we arrived at the hostel in Bacalar (haha, never slept in concrete tubes before!) the owner told us good news – that we really could go from Chetumal to Flores in one day and that transport even exists from Bacalar!

We were told the following:

LONG STORY SHORT, HERE IS THE SUMMARY OF THE WHOLE TRAVEL SAGA:

The REAL duration of the trip: 13 hours

Number of grey hairs obtained: quite a few

WHAT WAS THE JOURNEY FROM CHETUMAL TO FLORES IN ONE DAY LIKE?

The van was supposed to pick us up at 7.15 am in front of our hostel in Bacalar.

When we woke up, we luckily saw an e-mail (sent at midnight) that the van could not pick us up at the hostel, but instead we should wait at the park in the town center at 7.50 am (really, does somebody actually believe such precise definition of time when in Mexico? 😀 ).

Okay, we grabbed a taxi and went to the center, where some passengers were already waiting for the van.

Around 8 am a Canadian girl asked me, “At which hour did they tell you to be here? They wrote to us to be here at 7.15 am and now we are worried a little bit.”

When I explained they have told us to be ready at 7.50 am and that it will probably take a little longer, her face relaxed. 😊 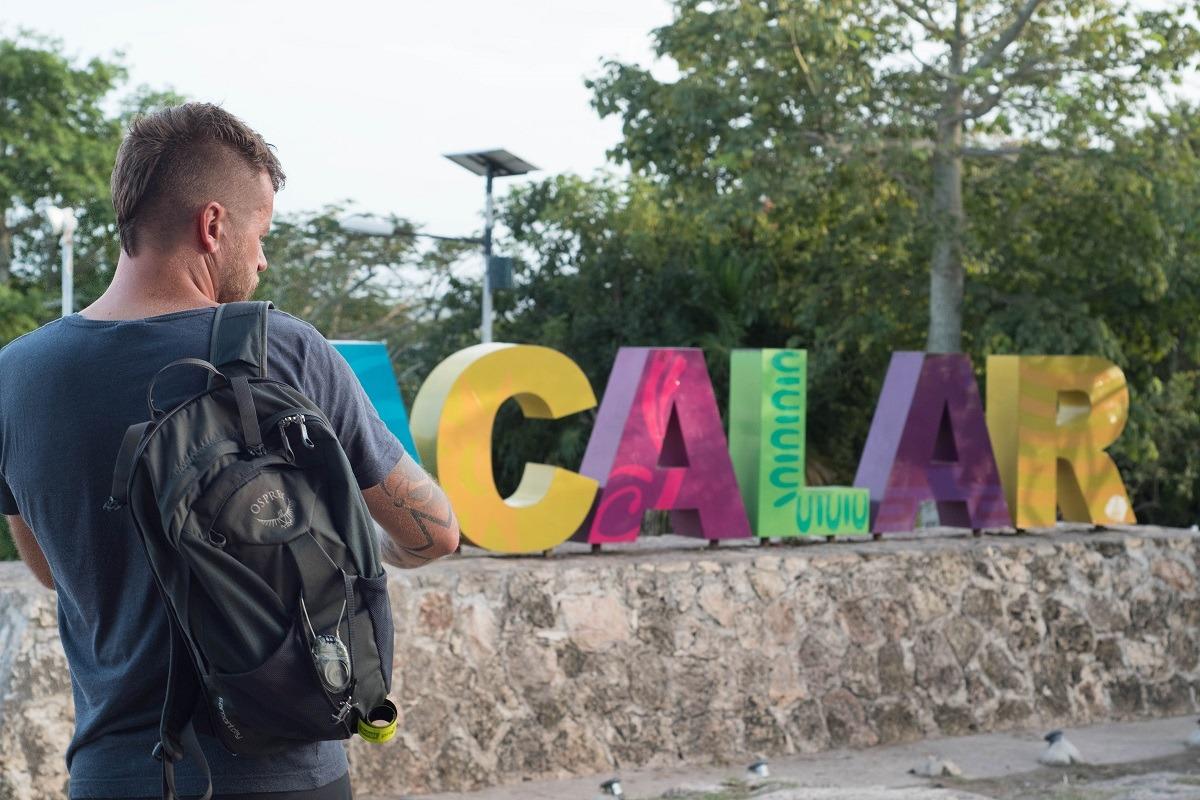 Indeed, about half an hour later the van appeared and we headed towards Chetumal. There we stopped at the company that organized the transport and learned that the van would only travel to this point.

We had to transfer our luggage to vehicle no. 2 , which was A second class bus (it was by no means the worst bus ever, but it was worse than the van).

They offered us breakfast and we had to fill in the immigration forms for Belize. At around 10.30, we continued our journey towards the first border and at this point bets were already being made on when we would actually arrive. 😀

And then came the surprise…

Driver no. 2 asked us if we all had US$30 to pay an overland departure tax from Mexico.

We were all hurrying to explain that we had already paid for all tourist taxes as part of our airline tickets for Mexico.

The bus driver claimed that this tax applies only if you also fly from Mexico, but if you leave the country overland, you are supposed to pay an additional tax.

All the way to the border, we were looking for a solution on the internet – unsuccessfully. Most people wrote that in the end they were forced to pay the “overland departure tax” at this specific border.

When we reached the border, the bus stopped at a small house with “immigration documents” handwritten on it.

We had to go to that barrack individually and almost (!) all of us had to pay a departure tax, in spite of arguing a lot.

The border patrol officer told us that if we do not want to pay we don’t need to but then we cannot leave the country. Awesome, right?

When Bojan demanded the bill, the guard yelled at him that we are not at the bank.

But … two people successfully avoided payment. And were TOLD NOT TO TELL ANYBODY ABOUT IT. (of course, they told us the minute they came back on the bus 🙂 )

You can imagine our bad mood – there were about 20 of us on the bus and together we paid around US$ 600!

To top it off, the Mexico exit tax is valid only for one exit/entrance – which means that you are forced to pay it once again when returning to Mexico (if you are, for example, only on a day trip to Belize).

After paying the exit fee, the bus took us a hundred meters further and then we had to take our backpacks and walk through the border (not an unusual thing in Latin America). Queues were not too long and luggage check exists more in theory, so you’re quickly on the other side. We went on the bus and set off again.

Belize City, where we were again transferred to a new bus (identical to the previous one) and we got a driver no. 3.

At this point, it was already 3 pm, which means that per the expected timeline, we should have already arrived in Flores… 🙂

At the border with Guatemala, a similar procedure followed as earlier in the day, but it was not necessary to carry our backpacks across the border.

An exit fee applies to leaving Belize as well. Some people were under the impression that if you are in the country for less than 24 hours, there is no fee, which of course was not the case.

We didn’t have any of them (“planning expert” is not our middle name), so intense negotiations followed with the guys who change money at the border.

Actually, we were so caught up in negotiations with them we didn’t see everyone else had already crossed the border and only then did we realize that the driver probably hadn’t counted the passengers and the bus could leave without us!

On top of it, this border was quite chaotic and there were no signs where to go so saying that we panicked a little is an understatement. 😀

Not all was bad…

In the end, it seemed like the guy with the money felt pity for us and gave us a good exchange rate.

We got our Belize dollars to pay the exit fee and the remaining amount in Guatemalan currency. Unlike in Mexico, we got an official invoice for paying the Belize departure tax. 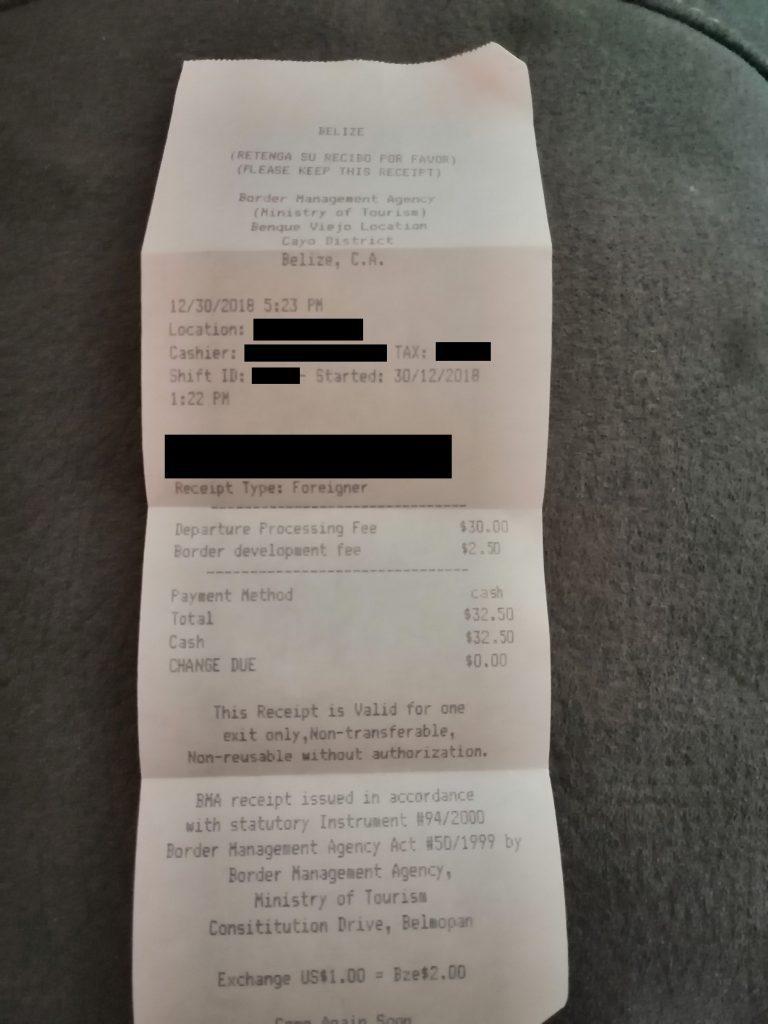 If you ever find yourself at this border and to avoid getting lost (as we almost did), after leaving the immigration office, go straight to the border, cross the road there and go to office no. 2. They will put a stamp in your passport and you can walk to Guatemala. For EU citizens a visa is not required, but make sure they write “90 days” in your passport. This is important if you plan to travel further south – Guatemala, Honduras, San Salvador, and Nicaragua are part of a single area within which you can stay for 90 days.

Luckily, the bus was still there when we finally crossed the border. Man, were we relieved.

Everyone was waiting only for us and driver no. 4 was scanning the border fearfully, waiting for 2 gringos to appear.

Great, we arrived in Guatemala.

It was already past 6 pm, it was dark and we had another few hours of the drive ahead of us. At 9 pm we had finally reached our destination – Flores.

We were exhausted but – as you can imagine –  immensely happy that the journey was over! 😛

HOW TO AVOID PAYING MEXICO DEPARTURE TAX WHEN CROSSING THE MEXICO – BELIZE BORDER?

As I have mentioned before, not all the people had to pay a departure tax when leaving Mexico.

Upon talking with the ones who avoided paying the fee and further research we have found out the following:

Do you know what’s funny? This scam has been going on FOR YEARS and it doesn’t look like anything is about to change! Just Google Mexico Belize exit scam/border crossing to see what I mean.

Usually, people remember the first and last impressions of a certain country and leaving Mexico overland on this border will leave you with a bitter taste in your mouth.

TO SUM IT UP – IS IT WORTH GOING OVERLAND FROM CHETUMAL TO FLORES IN ONE DAY?

Considering the time and money we spent on this journey and a “tax scam” situation we feel going from Chetumal to Flores in one day may not be worth it.

It is an adventure for sure and if you are really on a tight budget, than, by all means, go for it – just try to get that printed plane ticket invoice to avoid spending extra money.

But otherwise, we would suggest one of these two options:

If you went overland from Chetumal to Flores in one day as well, share your experience with us! And let us know if you have any extra tips on how to avoid the Mexico tax scam! 😉

Are you or your brother/second cousin/friend/colleague/basically ANYONE you know planning to travel the same route? Pin this and tell them about it! 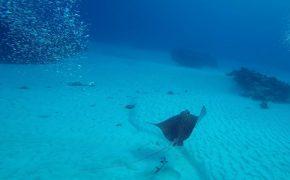 SCUBA DIVING IN COZUMEL, MEXICO: A LOVE AT FIRST BREATH 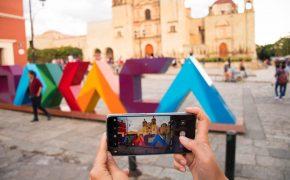 WHAT TO DO IN OAXACA, MEXICO: 25 AWESOME THINGS 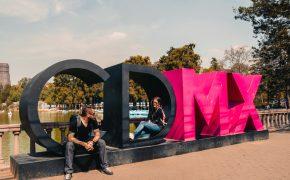 4 DAYS IN MEXICO CITY: A PERFECT ITINERARY FOR FIRST TIMERS