JOURNEY TO THE BEACH... OR AT LEAST WE THOUGHT SO😊 (Cuba Travelogue 4/5) - BlueMarble Vagabonds

Apparently, our trip to Viñales was a rather lucky one (went there by bus!) because when heading from Viñales to our next stop, Playa Giron (Vamos a la playa, oh oh oh oh), our taxi was once again a run-down Lada Niva. Oh, and to top it off, three of us were crammed in the back seat. Even though at first, Bojan and I were alone in the cab and I conveniently sat behind the driver’s seat, somehow, Murphey’s law got to me and I managed to get rammed into the middle of the bench at the back with no seatbelt whatsoever (er – not that they exist at all in old Lada Nivas).

That wasn’t an obstacle for the driver and speedometer reached at least 70 mph on the highway (let’s not forget the bumpy roads in Cuba); I’ve almost hit my head several times in the rooftop. And of course, due to opened windows noises of wind and struggling engine were deafening. Oh, what would life be without adventure!

Somehow, we managed to survive our trip to the outskirts of Havana, where our fearless driver handed us over to one of his friends.

This is how a taxi can look like as well. Especially if you’re in Cuba.

Even though we paid for a ‘taxi collectivo’ to take us all the way to our next destination, we had to finish the last stretch of the journey in an overhauled truck; a common sight found in Cuba. And again, we were crammed like sardines in a can. The rusty old doors, moving furiously due to the speed functioned as a makeshift radio set – if you can call those sounds music – and there was plenty of fresh air. 😉 Bojan came down with a toothache – I wonder why…

Illiteracy is a seldom thing today, but somehow I managed to misinterpret the info I read about the town of Playa Giron; for some reason, I thought it was snorkeling heaven when in reality there are only a few short stretches of sands there. Plus, the owner of the house in which we stayed in, had conflicting meanings as to what ‘proximity’ means.

For her, staying in a house a mile from the beach was the same as staying at a “beachside house”. To be frank, however, there was no way of getting closer than a few hundred yards to the beach, as at the seaside, there was only one hotel complex with countless bungalows, the majority of them abandoned and in decay.

For me, it seemed like a surrealistic scene, as children played and horses grazed the grass amidst the crumbling facades of the once lush and beautiful resort. Even though we saw some tour buses arriving at the reception, there were very few tourists in sight, the bar was a desolate wasteland and the greenish water in the pool was a clear sign, that no one had gone into that puddle in a long time. They view would be nice, but sadly the hotel is protected from the rambling waves by a high concrete wall, which completely veils the view. Oh, and bathrooms near the lobby were lacking doors. Peekaboo time?

Yet, a single night still costs well over $100, as does every other hotel in Cuba. It seems that someone had dreams of grandeur when they decided to build this resort, but something went slightly wrong along the way.

You can look past that wall… but you cannot overlook it 🙂 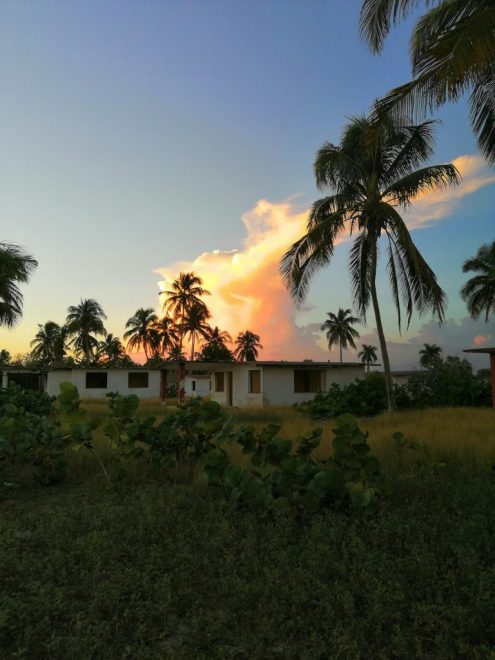 But hey, at least we were still in the Caribbean after all!

Despite the 8- hour journey, we decided to slip into our swimsuits and walk to the beach. The beach in Playa Giron isn’t a particularly breath-taking sight – at first glance, it looked like a sandy paradise but was in reality filled with small pebbles, stones, and LOTS of seaweed inside the water.

But I don’t want you to think I’m just complaining – naaah, that’s just me observing and not being able to keep my mouth shut. 😁

Actually, a cold refreshing beer on the beach, whilst the sun hid behind the horizon made everything worthwhile as we outlined the plan for the next two days – to go biking, visit a crocodile farm, a few cenotes and go snorkeling at nearby beaches.

And, in the end, we quite enjoyed staying there! 😊

Sunset at the beach makes any day perfect 😉

There’s one thing many of you probably don’t k