VISITING HOBBITON: EVERYTHING YOU NEED TO KNOW 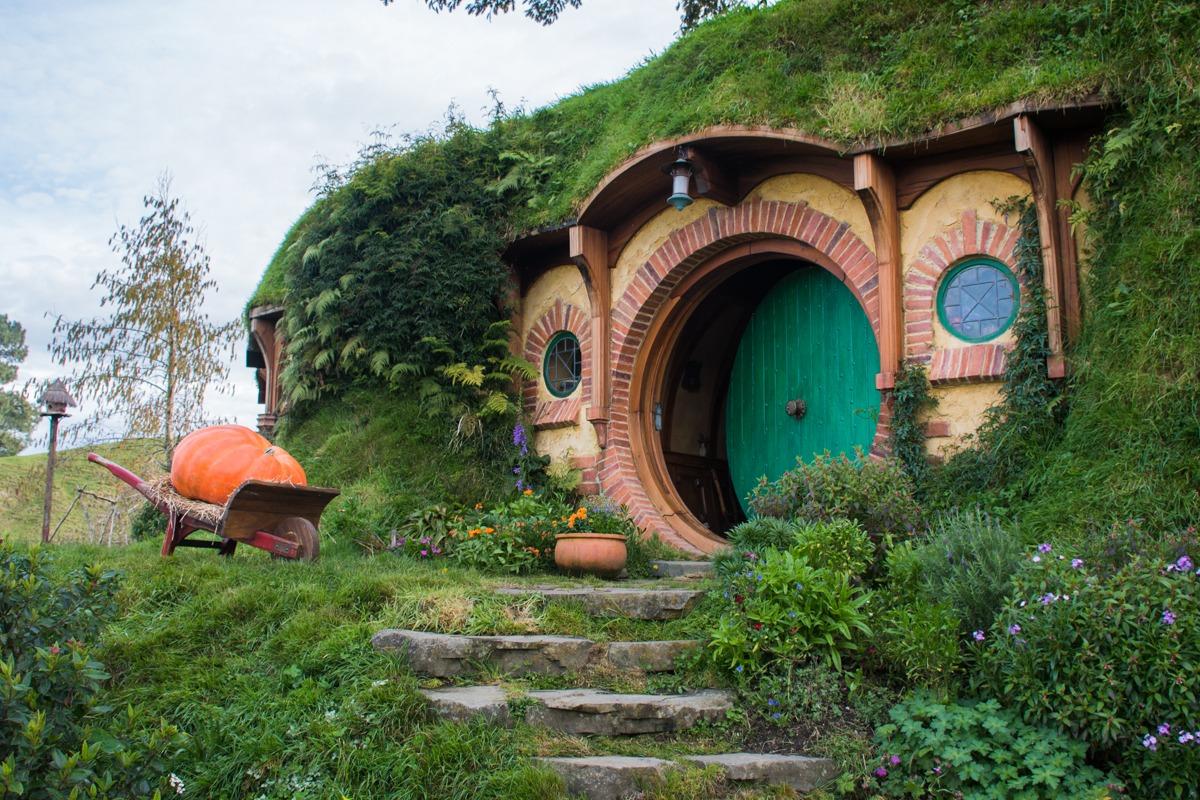 VISITING HOBBITON: EVERYTHING YOU NEED TO KNOW

By
Sandra
on
This post may contain affiliate links, which means that if you choose to click trough and make a purchase, we will receive a small comission (we’re literally talking pennies here folks!) at absolutely no extra cost to you. This allows us to keep creating awesome travel tips for free and… Ah, who are we kidding here, we’re gonna spend bucks by buying yet another flashy toy for our dog which His Highness will promptly ignore.
Share
Tweet
Pin481
Share
481 Shares

“It’s a dangerous business, Frodo, going out your door”.

If the above quote rings a bell (and you are already silently humming the Shire soundtrack), then visiting Hobbiton movie set while in New Zealand should be on the top of your bucket list.

But even if you are not the biggest Lord of The Rings & Hobbit fan, or you haven’t even heard of the movies (highly unlikely though), the charming landscape of the Shire will not let down.

The bus starts to move. In the seats around you, tourists are happily chatting with cameras ready to capture whatever magic they are about to encounter.

From the TV screen in front of the bus suddenly a deep voice thunders.

It belongs to Peter Jackson, director of the movies, who a second later appears on the screen and greets us.

All the bus echoes back a loud, enthusiastic hello. It feels like the first day of school when you are super excited and can’t wait to impress your teacher.

With the difference that we are trying to impress a television. 😉

From the screen, Jackson tells us a thing or two about the movie set and explains how they discovered this lush green patch of paradise; meanwhile, our noses are already stuck to the windows and our mouths form “oohs” and “aahs” upon entering the property.

Fluffy green hills that look just like they would be taken straight out from the Teletubbies and hundreds upon hundreds of sheep are chewing lazily without paying too much attention to the passing bus. 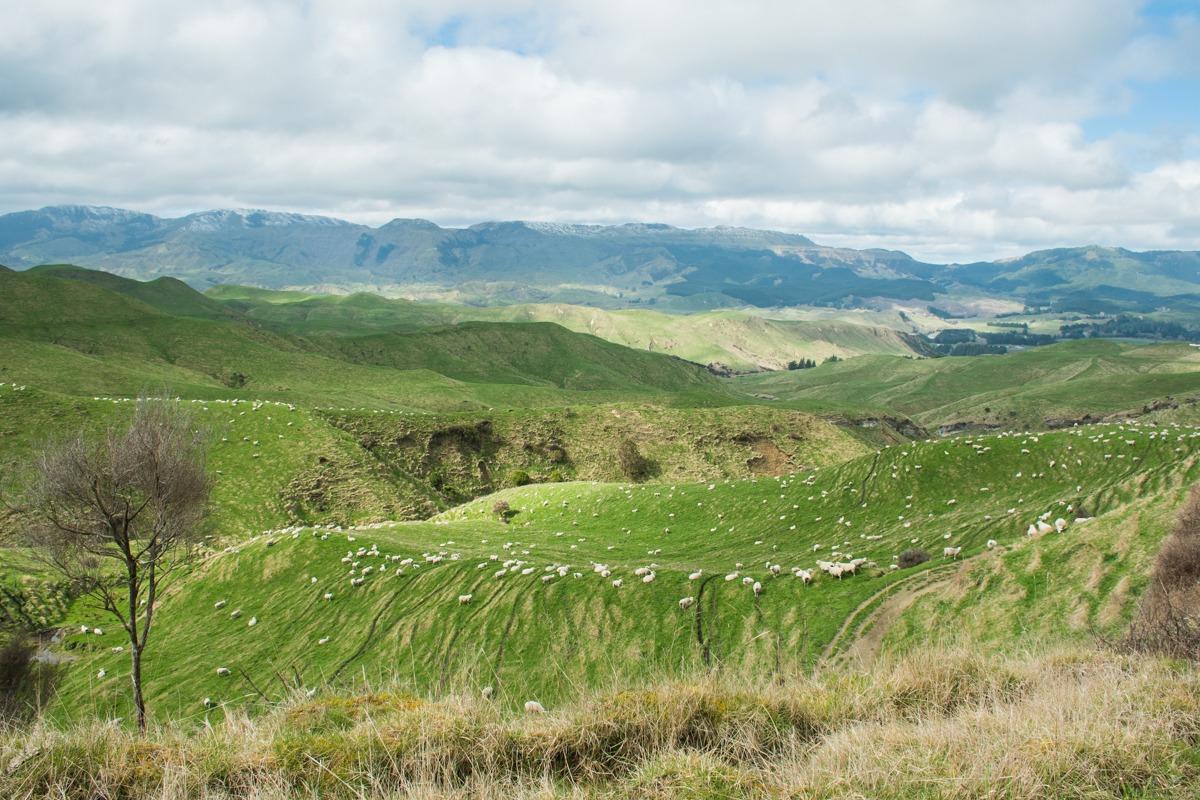 Jackson yells, “Left, look left! This is where the famous scene was filmed when Gandalf came to the Shire and told Frodo who was accusing him of being late…What did he tell him?”

My brother loudly jumps in: “A wizard is never late, nor he is early. He arrives precisely when he means to.”

Phew, what a relief – it seems I am not the biggest fan around here. I only recited the quote in my mind after all 😛

Another turn or two and the bus stops.

The guide swiftly performs the usual speech – stick to the group, don’t stay behind, follow my it’s-all pink-on-the-inside umbrella, I can take your photos to recreate your favourite movie scene (spoiler alert: she really can!).

We finally manage to disembark the bus and find ourselves in front of THE sign.

For a second or two the world stops when each and everyone’s face is directed towards the sign and we are all wondering the same thing: Wow, it REALLY exists. 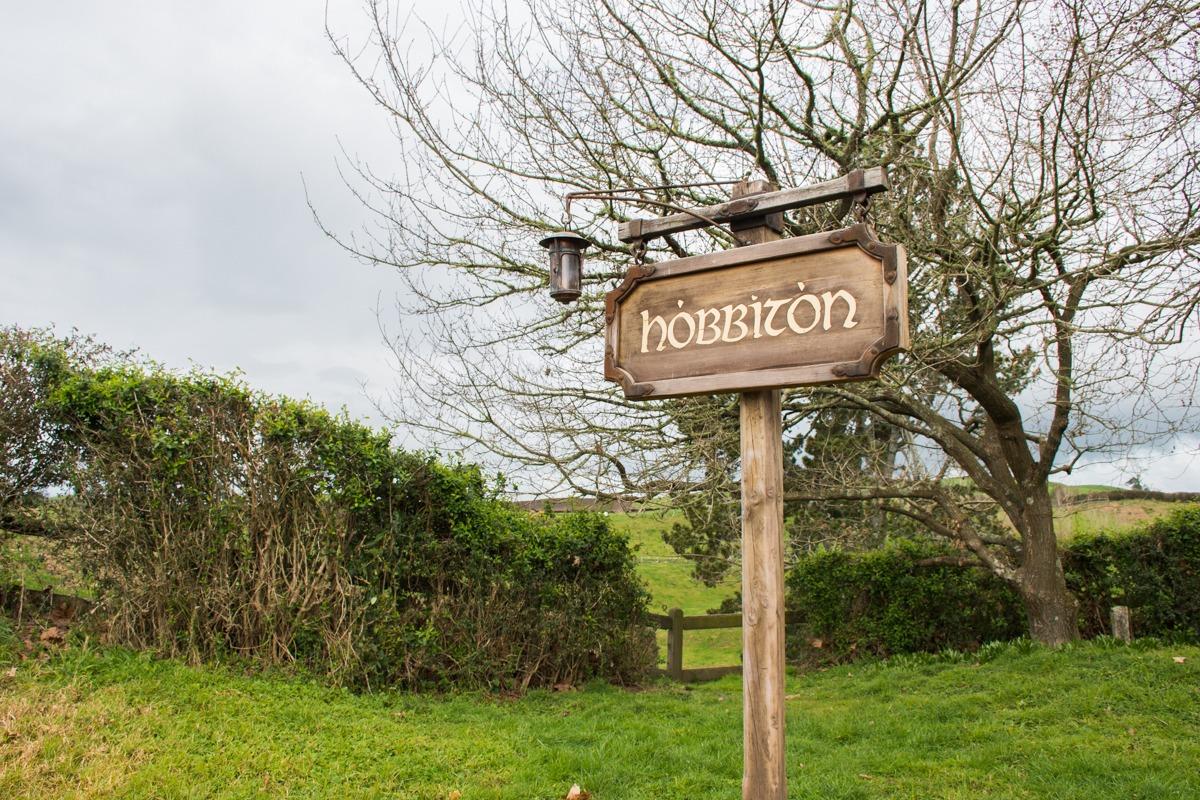 The magic doesn’t last forever though. As soon as the charm is broken everyone tries to reach the sign first and take that perfect photo.

A word of advice here:

Just wait for the most enthusiastic tourists (you can recognize them by the gigantic cameras that hang from their necks) and wannabe Instagram-celebrities to strike that pose (or ten). When they are done and are in search of the umbrella, you’ll have plenty of time to make your own memory as well.

I’m not encouraging you to “break the rules” and stay behind the group, only to wait for a few minutes for the crowds to clear. 😉

A slight surprise (perhaps with a touch of disappointment) is the fact that Hobbiton is NOT huge (especially in comparison to WarnerBros studios in London where we visited Harry Potter).

In fact, Hobbiton consists of exactly 44 hobbit holes punctuating the slope of one hill and the surrounding area.

But here comes the real surprise… there is nothing behind the door of 43 hobbit houses!

Well, basically the door can’t be opened at all. 😀  The scenes inside the hobbit houses were filmed elsewhere and only one door can be opened which leads you to a more or less empty space.

Nevertheless, just moving the squeaky doors and stepping inside gives you the feeling that this IS REAL after all. 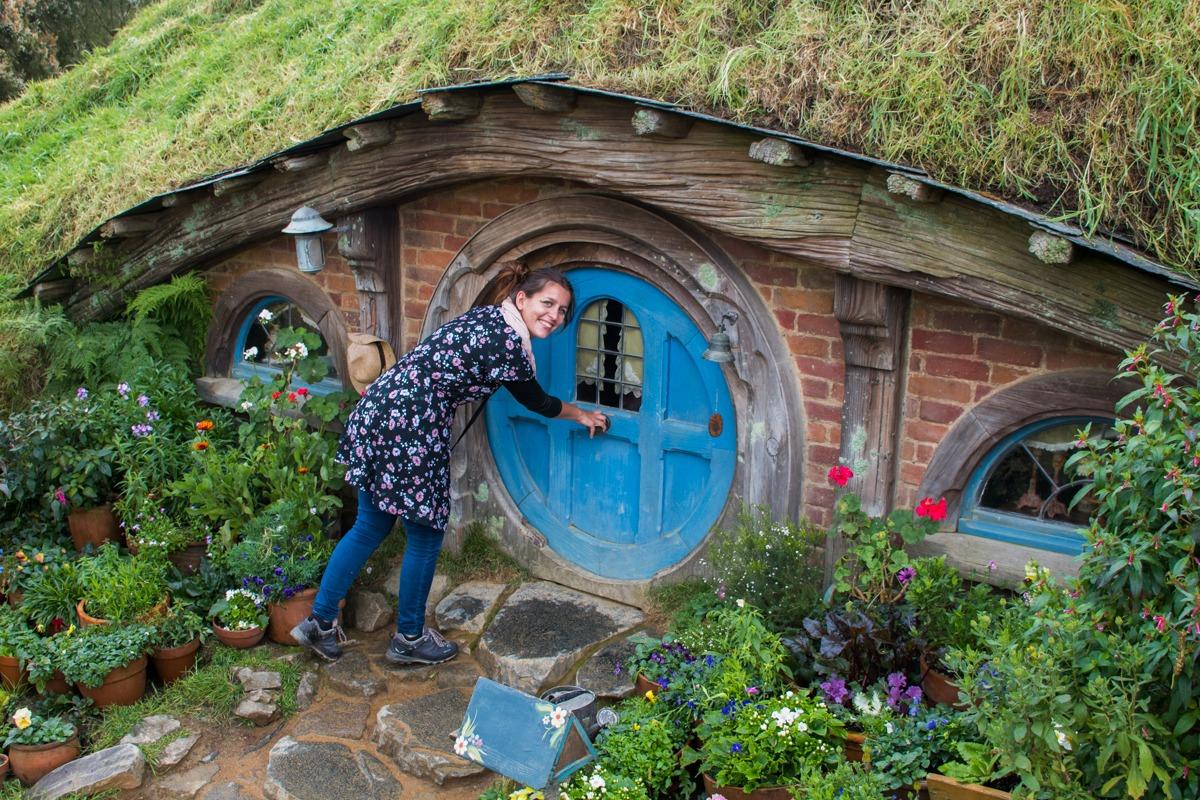 And regardless of the fact that there is just ONE actual hole, the houses are so cute from the outside, with so many details – from bread loaves on the tables to blacksmith tools and small mailboxes – you can easily forget that the magic ends behind the doors.

And best of all – 44 holes means crowds somewhat scatter around and you won’t be short any photos – the only thing to consider is perhaps to bring that extra camera battery with you!

While visiting Hobbiton, make sure you pay attention to the amazing details; miniature hobbit suits that dry in the wind, chairs and tables, wooden carts and signposts.

There are even real vegetable gardens and fruit trees to make the experience more authentic!

It’s quite remarkable to see what lengths the film crew went to make The Shire as magical as one can imagine. 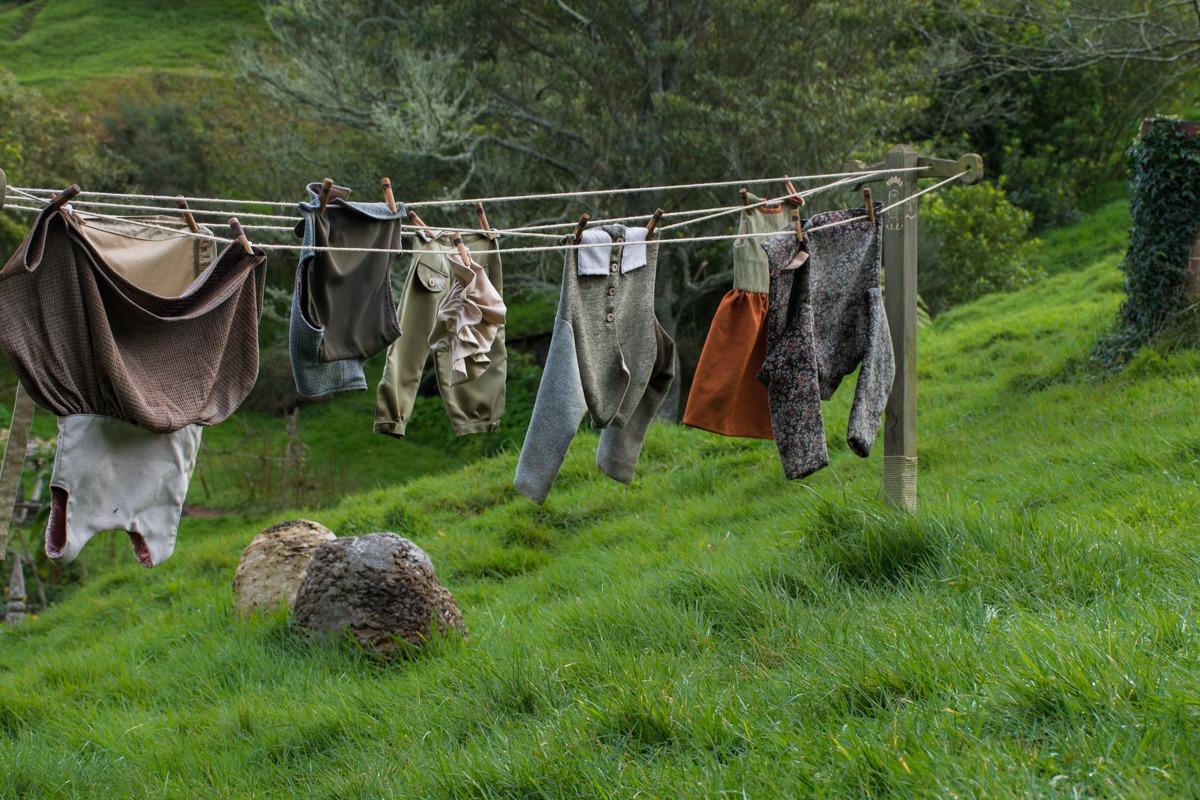 No, unfortunately this is not the hole you can enter into! However, you are free to take as many photos as you’d like in front of Frodo’s house.

Above the house grows a tree that no one would guess is completely… artificial.

Including 200,000 hand-painted leaves!  The story goes that Jackson came to check the tree a few days before the shooting and upon seeing it he commented: “The leaves are not the right shade of green.”

Since artists had only days to do a month’s work one can imagine their stress level must have been at least as high as when you can’t find your passport just before check-in. 😉 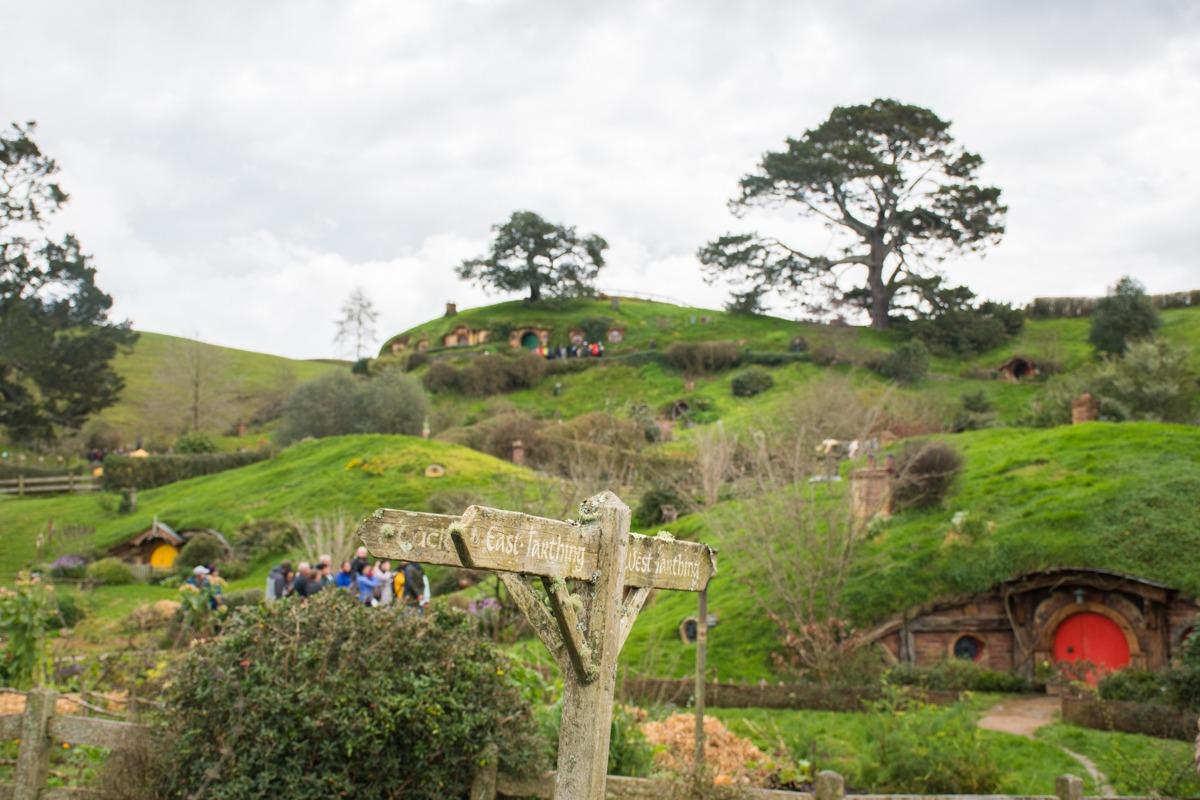 The smallest tree on the top of the hill…is fake 🙂

Besides the Hobbit holes and Bags End, you’ll find some other cool places in Hobbiton! The area in the first movie where the party took place is still set up, and toward the end of the tour you’ll cross the bridge by the mill.

The tour ends at another famous place – The Green Dragon, where you can order a refreshment or a quick bite.

In fact, the ticket also includes a complimentary drink and depending on the age, you are entitled to choose between a variety of beer or apple cider.

A pint of velvet stout with a view of Frodo’s home nicely rounded out the experience of visiting Hobbiton. 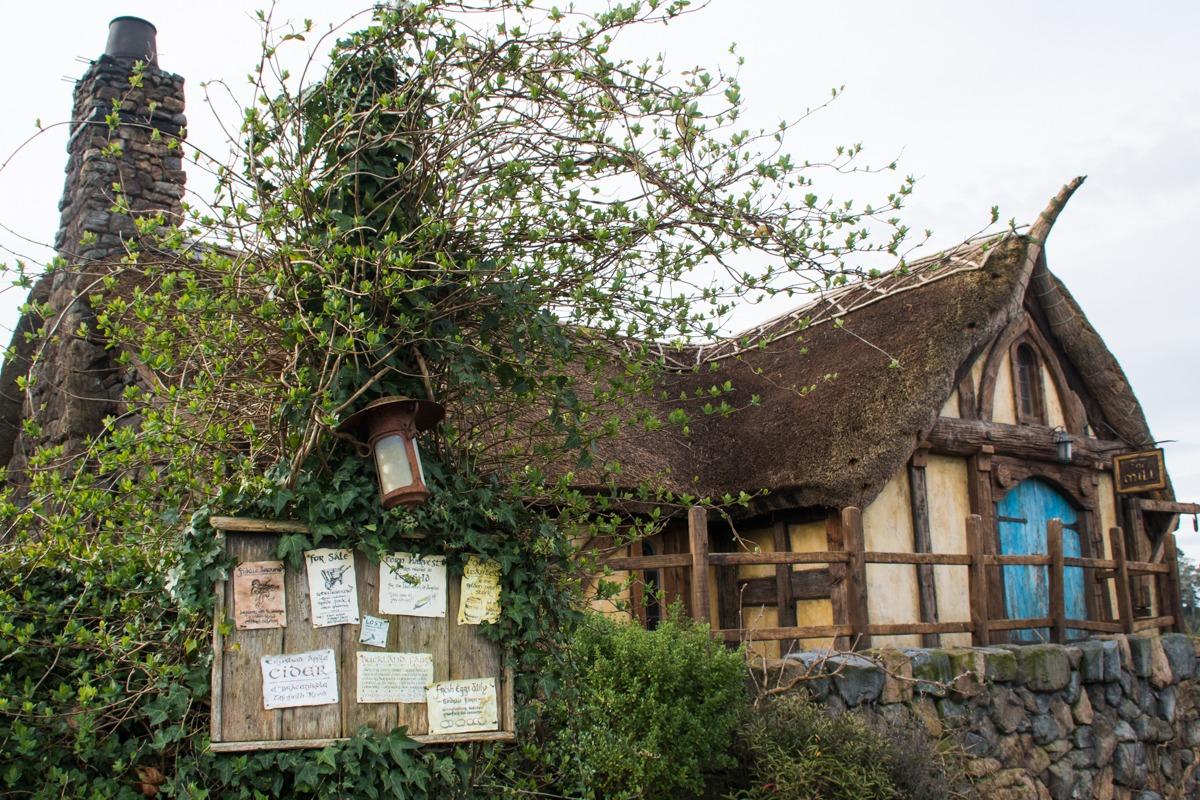 A place to drink a pint or two

SOME JUICY FACTS FROM THE LAND OF HOBBITS

There’s more of course! But I’ll let you find out for yourself when you visit the home of the Hobbits. 😉 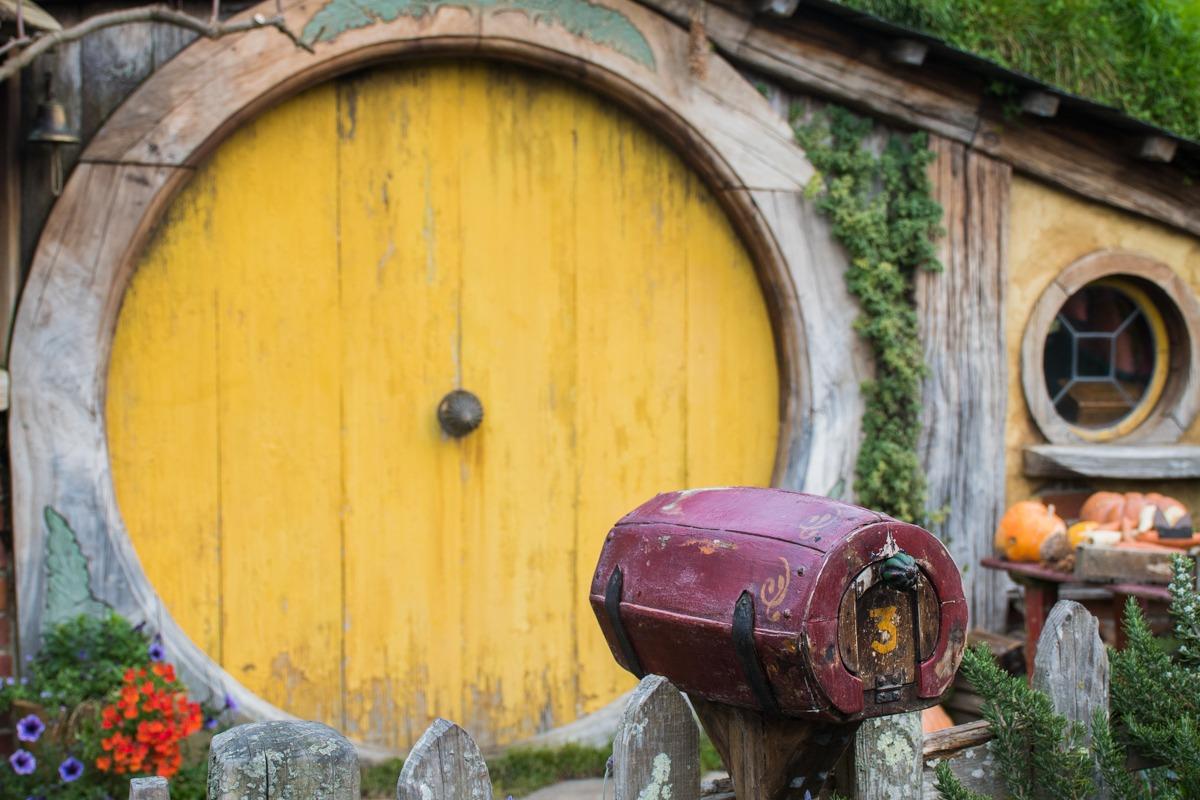 Each mailbox has a number! 😀

THE PROS AND CONS OF VISITING HOBBITON

⊕ the landscape is simply stunning

⊕ for all Lord of the Rings and Hobbit fans this is definitely a one-of-a-kind experience, as it feels like you’ve really come to the Shire

Θ Hobbiton can only be visited as part of the tour (as it is located on private land). It is not possible to buy a ticket and then stroll around and explore at your own pace.

Θ Admission is quite pricey – 50 € for a 2-hour visit (these two hours also include a short bus ride and a time for complimentary drink at the end). Children under the age of 8 can visit Hobbiton for free and for children from 9-16 ticket cost is 28 €. 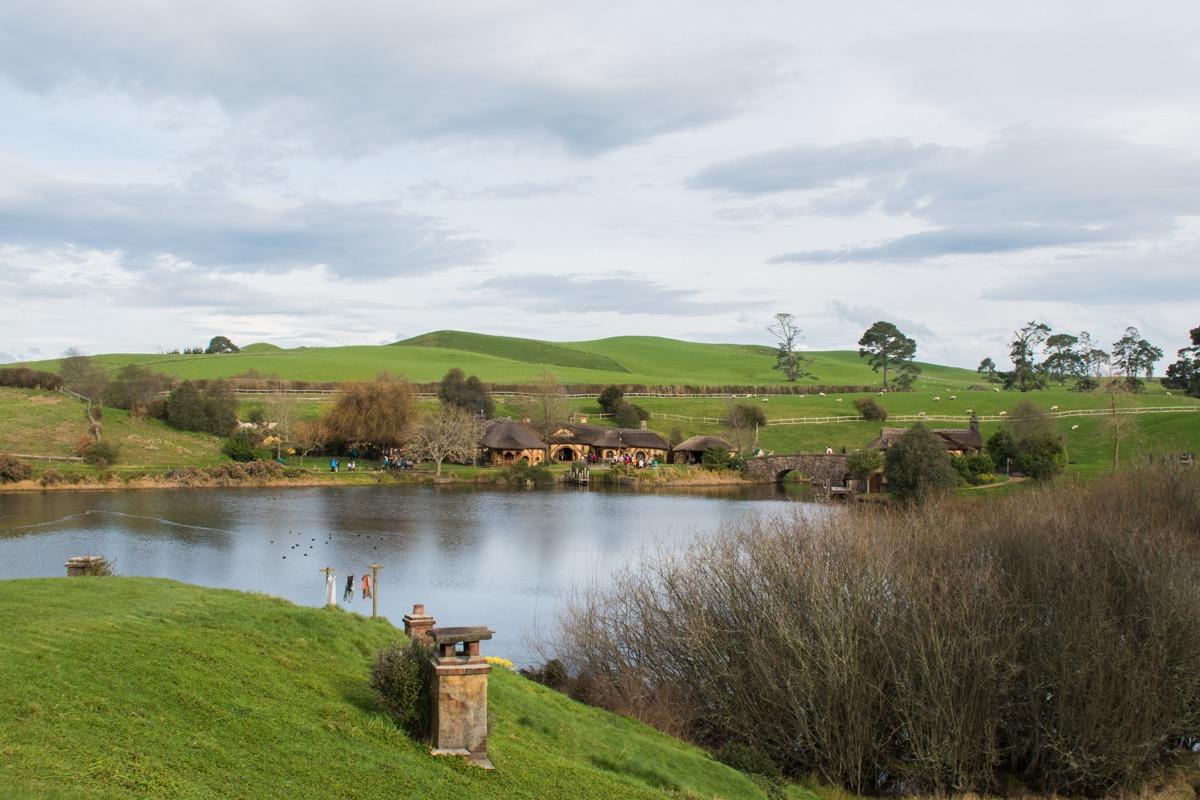 Here are some tips to make your visit enjoyable: 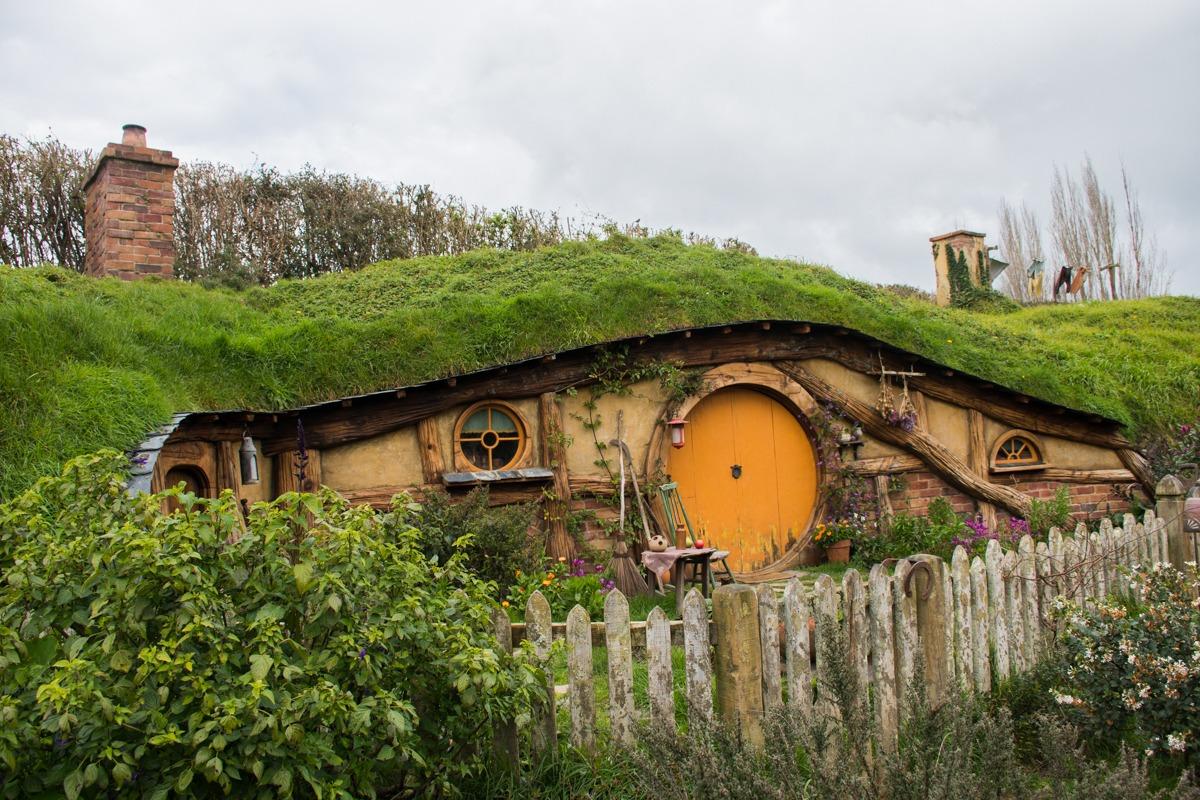 How to get to Hobbiton?

The Hobbiton is located near the village Matamata, which is a one-hour drive from Rotorua or 2.5 hours from Auckland.

→ In the case you book a whole day tour, transportation will be included in the price.

→ If you are travelling by car, it is best to book tickets from The Shire Rest, which is located just across the road from the property with the Hobbiton movie set.

→ If you are travelling by bus, take one to the village of Matamata, which also houses the Hobbiton tour office (address: Matamata i-SITE, 45 Broadway, Matamata) and their bus will take you to the movie set a few kilometres away. 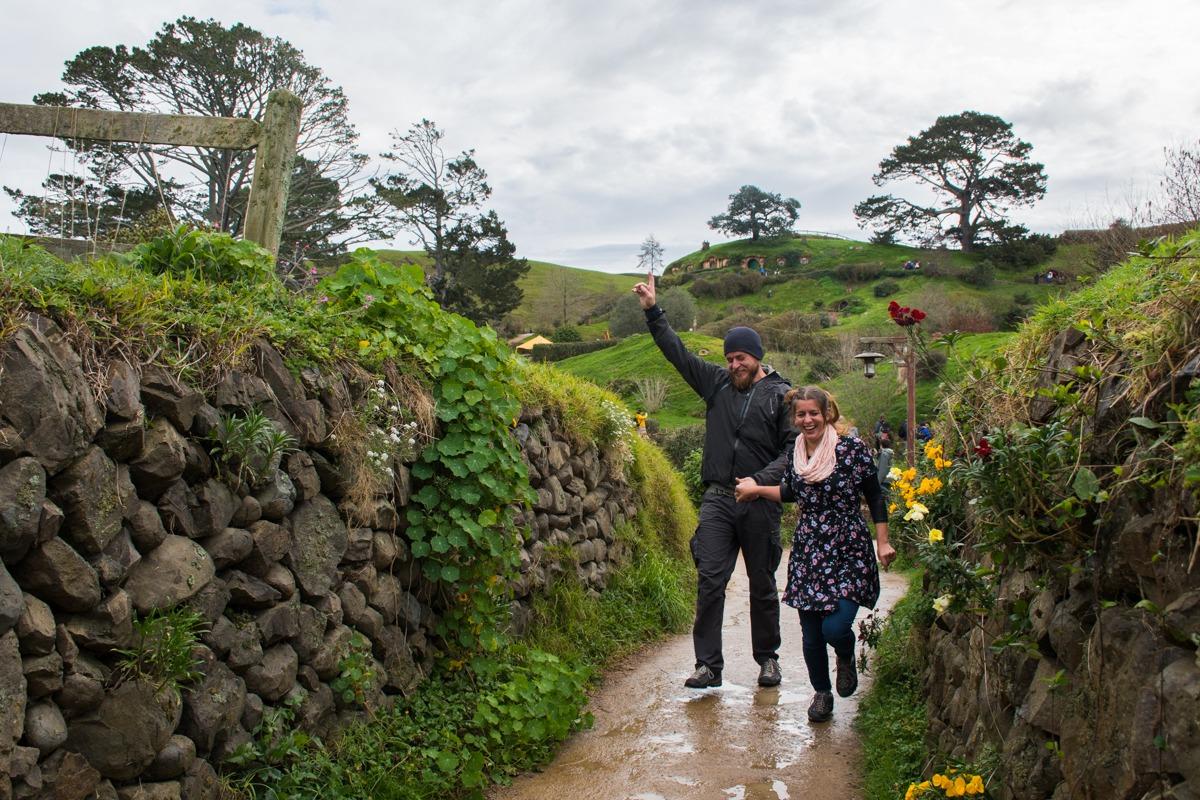 “We are going on an adventure!” Does anybody know this scene? 😉

Are you still deciding whether is it worth visiting Hobbiton?

It is true that the overall impression was that the whole thing is slightly rushed and a bit overpriced, but we wouldn’t have missed it for anything since it really brought the Shire “to life” for us!

And there is a pretty high an absolute chance that after your visit you’ll also spend the following nights in front of your computer screen, binge-watching all the movies.

Have you already visited Hobbiton? We would love to hear your thoughts about it!

And if you’re planning a trip to Hobbiton, don’t forget to pin this for later! 🙂 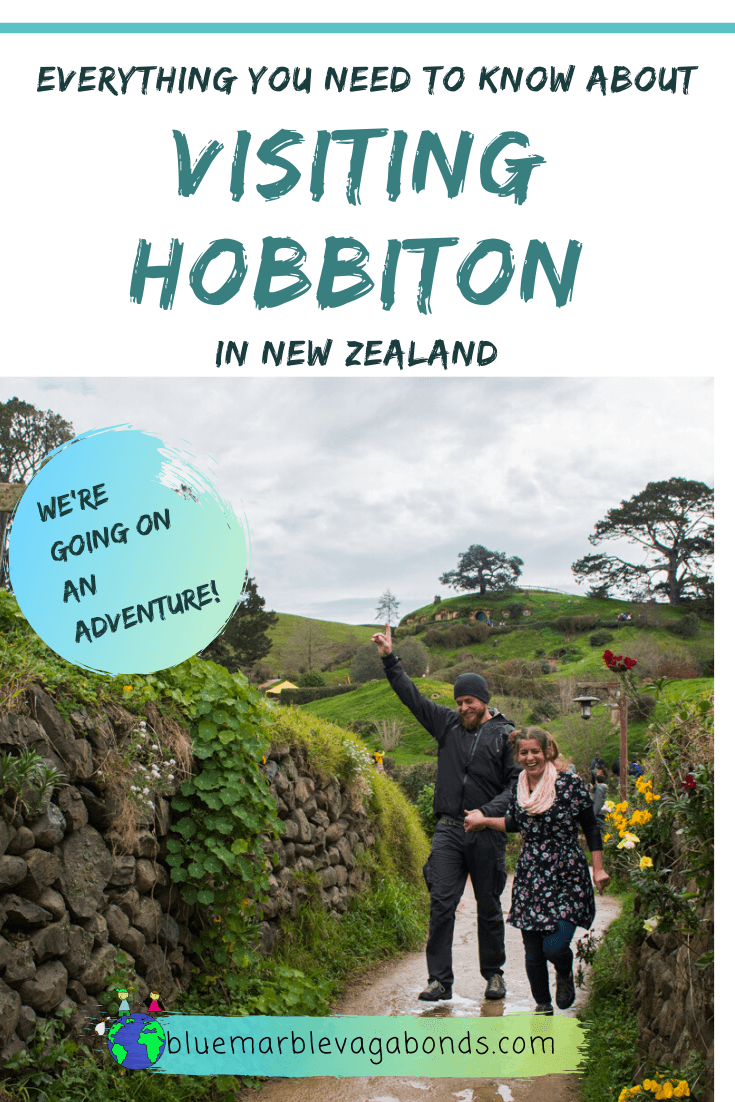 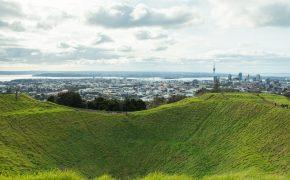 HOW TO SPEND 3 DAYS IN AUCKLAND