5 CASTLES YOU SHOULDN’T MISS WHEN IN WALES - BlueMarble Vagabonds

5 CASTLES YOU SHOULDN’T MISS WHEN IN WALES

Every city, town or village in Wales (you get the idea, right?) features a castle or at least what remains of it. There are supposed to be more than 600 castles in total in that beautiful land. Despite that there are mostly ruins left surrounded by magnificent walls they are still stunning and with a little imagination one can almost expect that a knight is about to come riding from behind the corner. Although I wouldn’t opt for such residence (after all, I was freezing already in April, now imagine being inside those walls in the harsh winters) those monuments are pretty fascinating and well worth a visit when exploring Wales.

Placed in the northern Wales this sleepy seaside town (the one with the traffic signs “beware, elderly people” 🙂 ) is almost completely surrounded with the old city walls and the vast castle which is currently under renovation. Walking on the walls is for free  and you are rewarded with beautiful views and if you’re lucky (?) you stumble upon a bunch of seagulls who apparently decided that this is ideal place to produce some new members of the family. Oops 🙂 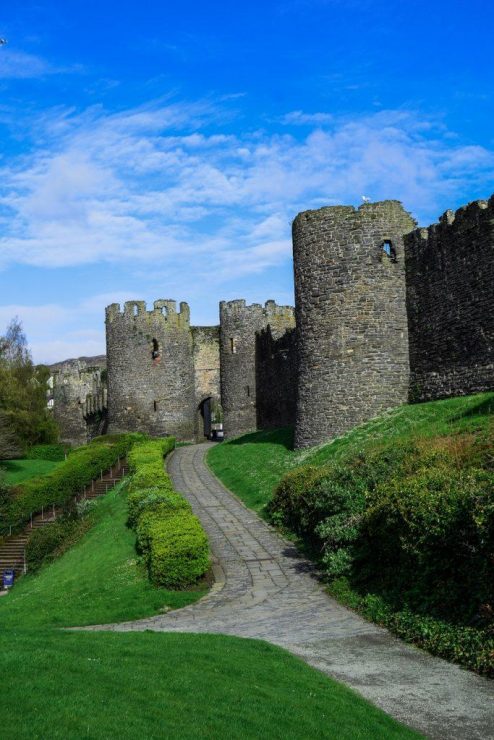 ..and from upside down.

Welcome to Robin Hood story. Or Merlin’s home. Or something equally outstanding that you’d expect to see in medieval themed movies. This enormous building is surrounded by big round towers and protected by extensive artificial lakes. Taking into account that it was built in the 13th century this is truly a masterpiece and if climate would be warmer here I’d even consider it as a possible summer residence. 🙂

So simple – if you don’t want a visit, you remove the bridge 😛

This is a medieval castle and partially as well Victorian revival mansion located in the city center. It is one of rare castles that is not only a ruin. Part of the castle has been later renovated in Victorian gothic style so wandering through vividly decorated rooms gives you that real feeling how life there looked like. There is also a beautifully preserved library where I’ve found books from Encyclopedia Britannica till Thousand and One nights and bookworm as I am all I wanted to do was crawl into one of the armchairs and disappear for a day or two. Too bad it is forbidden to do that 🙂 Another interesting thing – during the World War castle walls were transformed into shelters that could accept up to 1800 people. While passing through the dark corridors you’re being accompanied with the deafening sound of bombarding to give an impression what it must felt like being here during the attack. Goose bumps are guaranteed.

Welcome to our home 😉

The little brother of the Cardiff Castle is located in the outskirts of the city and you can reach it with the bus. This fairytale-like castle was also build in Victorian style and here they didn’t spare when it came to decorations. Dazzling ceilings, over-the-top furnishings and furniture – nowadays’ minimalistic interior designer would be horrified by its looks 😉

Have you noticed that most of the castle names in Wales start with letter C? 🙂 Well, this is not one of them. Located in the Harlech, overlooking at the sea the architecture of this castle clearly indicates that this was a fortification and not a luxurious place to live. I for sure agree with this since the wind here was so strong it was almost impossible to walk on the walls. The sea was originally much more closer than it is today so the considering the splashing water with those strong winds I truly hope they at least had enough fireplaces. 😉 As in the history this must be the isolated giant sitting on the rock nowadays the image is quite different and around the castle there is a bunch of cute little houses. In one of them you’ll find tiny patisserie with supposedly best ice cream in Britain. The owner also claimed that the fudge she produces the top of the top as well. Mmm, who could resist, huh ? Go and try 🙂

In case 5 castles is not enough and you’re aiming for magical 7 or even more, there are many left to see: Caernarfon, Powis, Penrhyn, Pembroke, Hye-On-Wye, … oh, and at least 500 others 😉

IN THE HARRY POTTER WORLD

It’s moody and chilly here today, like the weath

Yay, what a 5-day weekend it was!🙂 Lots of walk

And just like that, our pack got bigger☺️ Nui,

Went on an impromptu weekend trip to Budapest, and

Hacienda vibes at a beautiful villa in Croatia ❤

🇺🇸We have a zillion photos with the two od u